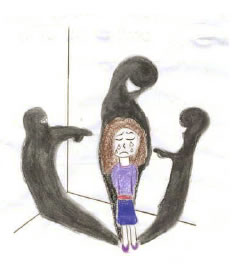 Tips and Resources for Parents

Tips and Resources for Kids

Bullying - Is Bullying a Problem?

According to the Virginia Department of Education’s 2009 Annual Report, there were 15,313 incidents against students, (an incident where the student is the target) and of that over 42 percent were bullying.  This number reflects an increase over previous years.  In addition, the biannual study of the “Ethics of American Youth Report” by the Josephson Institute of Ethics shows that half of all high school students say they were bullies in the past year.

With the increased availability of technology, kids today are devoting over seven hours per day to their e-media outlets (internet, phones, etc.).  This allows kids to be a target for cyberbullying, and unlike at school, where they can leave and seek refuge at home, the internet and cell phones are always around.  Psychology professor Andre Sourander Click here to go to article on Kaiser Family Foundation website.noted, “With cyberbullying, victims are accessible 24 hours a day, seven days a week.  There is no time when messages cannot be left on mobile telephones or sent via e-mail.”  In a recent Click here to go to survey of 13-18 year-olds, Cox Communications reported that 15 percent had been cyberbullied online, 10 percent via cell phone, seven percent had cyberbullied someone else online, and five percent had bullied another via cell phone.

Perhaps the most shocking statistic is that approximately one-third of students report this behavior to teachers or adults.

The effects of bullying are much deeper than superficial scares, or hurtful text messages, the Mayo Clinic reports that bullying can worsen the mental health of teenagers, many of which already deal with stress on a daily basis.  Teens who are bullied are more likely to report thoughts of suicide and suicidal behavior, abuse drugs and alcohol, skip school, and carry a weapon to school.  Bullying also has long-term effects on its victims.  Adults who were bullied as children show a higher tendency for depression, anxiety, chronic headaches, and overall low self-esteem.

Bullying: is intentional, repetitive, and can be physical, verbal, and/or emotional and includes electronic bullying, known as cyberbullying.

Cyberbullying: is a new phenomenon that includes, electronically sending mean, vulgar, or threatening messages or images online posting of sensitive, private information about someone pretending to be someone else online in order to make that person look bad using photo shop tools to create harassing images publishing jokes about another person on the Internet using the Internet to entice a group to physically harm another person can be done using email, IM’s, text messages, blogs, etc.

Virginia Law holds Virginia students to a model practice, and allows the School Board to use disciplinary measures if a student violates the model practice; bullying is a violation.  (§ 18.2-60)

Certain behaviors associated with bullying can also result in punishment under Virginia Law, for example: